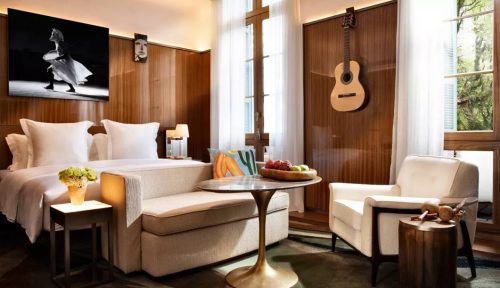 São Paulo, Brazil, January 12, 2022 / TRAVELINDEX / Encapsulating the city’s storied past and innovative future, the landmark new hotel marks a São Paulo renaissance. Rosewood São Paulo officially opened its doors, heralding Rosewood Hotels & Resorts entrance into South America as a new global icon for the ultra-luxury brand. Centrally located in the heart of the vibrant city near the lively Avenida Paulista, Rosewood São Paulo is a metropolitan oasis set within the historical enclave of Cidade Matarazzo, a complex of elegantly preserved buildings from the early 20th century that have been carefully transformed into private residences, high-end stores and entertainment venues. Anchoring the 30,000 square-meter mixed-used lifestyle hub, Rosewood São Paulo occupies the historic former hospital, Matarazzo Maternity, as well as a striking new vertical garden tower. The transformation of the heritage buildings is rooted in sustainability and makes Cidade Matarazzo Brazil’s largest upcycling project, with a focus on celebrating and protecting the country’s cultural heritage and natural environment.

Spearheaded by entrepreneur Alexandre Allard, recognized for his involvement in the renaissance of the House of Balmain, and designed by leading international figures including the Pritzker Prize-winning architect Jean Nouvel and artistic director Philippe Starck, Rosewood São Paulo is a love letter to Brazil, with a majority of the design materials both locally sourced and inspired by the country’s diverse culture. The new hotel is also home to a groundbreaking collection of 450 site-specific artworks, all created in partnership with local artists whose work draws from the multiplicity of the Brazilian experience.

Featuring 160 guestrooms and suites along with 100 Private Rosewood Suites available for purchase, the hotel’s luxurious accommodations are spread across the restored Matarazzo Maternity and the vertical garden tower. Rosewood São Paulo has instilled new life into Matarazzo Maternity, which holds great symbolic significance and sentimental meaning to the city as more than 500,000 Brazilians were born there. As both an emblem of the city’s rich history and a beacon guiding its future, Cidade Matarazzo holds a central place in the hearts of many generations of Paulistanos.

Rosewood São Paulo’s grounds also encompass the Chapel of Santa Luzia, another historic building that has been carefully restored to retain its ornate architecture from 1922. Throughout the renovation, the chapel’s original foundation revealed pieces of a rich and intricately adorned building that has been carefully refurbished and incorporated into the revived structure. The rebirth of Chapel of Santa Luzia comes timed to its 100-year anniversary as it reopens to a new era where it will continue to be used for weddings and other celebrations of life.

“It has been a true honor to help bring such a unique hotel project to life in one of the world’s most dynamic cities,” said Managing Director, Edouard Grosmangin. “The team behind Rosewood São Paulo has spent a decade on this project to ensure it honors and celebrates the heritage of the city while breathing new life into the destination. In doing so we’ve created a hotel that is a true love letter to the city, the nation, and its people. We look forward to welcoming the world to experience São Paulo’s dynamic offerings firsthand and provide the place from which a cultural journey can begin and end.”

In line with Rosewood’s guiding A Sense of Place® philosophy, wherein the distinctive ethos of the destination is woven into the identity of the hotel, Rosewood São Paulo’s design was inspired by its deep Brazilian roots. Under the artistic direction of Starck, 57 Brazilian artists and artisans came together to produce a permanent collection of art featuring over 450 works. Treating the property like a once-in-a-lifetime art project, the team commissioned artists representing Brazil’s wide range of artist expression, from street art to indigenous art, to create site-specific works for virtually every space in the property. The artists were given just one guideline: creativity that respects the past yet points to the future. The result is that the hotel is in effect Brazil’s next great contemporary art museum, one that celebrates the natural beauty, rich history, and diverse culture of its homeland.

Throughout the property, art tells different stories of life in Brazil across various mediums including sculpture, paintings, tile work, drawings, textiles and rugs. The entirety of the collection will be cataloged and detailed in a book available for guests and visitors both in rooms and public spaces. This book will tell the in-depth and nuanced narrative behind each project and highlight how each piece fits each into the larger tapestry of Brazil’s creative scene.

Standout works include hand-painted titles inspired by different flora and fauna of Brazil, created by Brazilian contemporary artist Sandra Cinto, that line the entire rooftop pool and bar area; a powerful graffiti-inspired painting encapsulating one of the maternity building’s corridors created by São Paulo’s own beloved street artist Caligrapixo, whose work focuses on capturing urban life in the dynamic city; and the work of up-and-coming artist Virgilio Neto, who created a series of original drawings on the rooftop foyer depicting imagined stories of the life of the beloved historical figure Count Matarazzo. Within the Chapel, Vik Muniz, one of Brazil’s most internationally acclaimed artists, created new glass rosettes inspired by Santa Luzia to replace the original stained glass that was discovered during the restoration of the building. In addition to the stunning beauty of the hotel’s design as a whole, there are nuances and intricate details throughout its design and art that aim to tell specific stories and honor both the heritage buildings and country at large.

A Focus on Sustainability

Rosewood São Paulo is committed to preserving Brazil’s natural environment with sustainability as one of the development’s guiding principles. Cidade Matarazzo is one of greenest developments in Brazil and the country’s largest upcycling project, with the project constructed of 100% locally sourced and upcycled materials. Sustainable features executed in the property’s design include a biodiversity program that repopulates the indigenous flora and fauna from the Mata Atlantica rainforest, including 250 trees up to 14 metres in height placed vertically on the Mata Atlantica Tower.

The property has committed to use 100% renewable energy within a year, including on-site solar panels and renewable-sourced energy. Creating a positive impact on the local community and environment is key to Rosewood São Paulo’s values and goals, and the building has been carefully planned to lessen the footprint wherever possible. The hotel is free of single-use plastics, and utilizes an in-house water filtration system to produce glass bottled water for guest consumption.

Part of a larger culinary renaissance for the destination, Rosewood São Paulo brings six new dining venues to one of the city’s most vibrant neighborhoods. Designed for a variety of different occasions, the hotel’s food and beverage offerings present a resounding and memorable combination of world-class gastronomic experiences served in immersive and unique spaces. The elegant Le Jardin extends from the lobby to the beautiful gardens and is a cozy space bathed in natural light, serving modern cuisine 24 hours a day and providing the perfect setting for a casual lunch or enchanting dinner. Blaise, inspired by French-Swiss novelist Blaise Cendrars, is a more casual brasserie space serving a delicious mix of French cuisine influenced by elements of Brazilian gastronomy. The restaurant’s design highlights the imagination of the novelist who was himself enamored with Brazil and showcases the work of Brazilian artists including hand-designed ceramic tiles by Fernando de La Rocque. As a nod to its location in Matarazzo Maternity, the hand-painted tiles are designed to resemble classical Portuguese tiles but if observed closer, hidden in the composition of the tiles is an image of a woman giving birth. Blaise’s wooden walls are embedded with green stones, each made of glass created through a meticulous technique of polishing Brazilian volcanic stones that is done by the same machines used to cut diamonds. The third restaurant, Taraz, highlights South American cuisine and its share-style menu has been designed by acclaimed Chef Felipe Bronze to showcase the art of wood-fired cooking. The restaurant is located in front of the property’s collection of centenary olive trees and has been decorated by local artists and designers in a more traditional and rustic style, and through its name gives homage to the beloved Brazilian historical figure Count Matarazzo.

Additional outlets include Rabo di Galo, a jazz bar featuring bespoke libations and classic Brazilian bar snacks alongside live music. The overall design of the bar was inspired by the classic jazz clubs of the 1930s, featuring leather furniture, dark woods and indirect lighting to create an intimate atmosphere. Artist Rodrigo de Azevedo Saad, locally known as Cabelo, spent a total of 68 hours hand drawling on the ceiling of Rabo di Galo, which portrays a certain schizophrenic art resulting in the magical and primitive universe of patterns that repeat themselves. Inspired by the natural beauty of the crystal-clear pools in Brazil’s Bonito municipality, The Emerald Garden Pool & Bar is a restaurant set amidst beautiful tropical greenery offering family-friendly fare. The interior of the pool emulates the emerald shades of the natural pools found in Brazil’s Bonito region and is made of small pieces of tile in 40 different shades of green and blue, creating a unique gradient effect inspired by the colors of the rivers located in Bonito. The restaurant’s coasters and menus were designed by the Brazilian artist and illustrator Walmor Correa, famous for his sketches of imaginary creatures. The pool area is also home to Belavista Rooftop Pool & Bar, an exclusive adults-only space with panoramic views of the city. The entire roof and pool area features wood that is all from Tora Brasil and that has been certified by Brazil’s Forest Stewardship Council as part of the property’s commitment to sustainable development.

In concert with the unparalleled art and design and exceptional food and beverage experiences found at Rosewood São Paulo, extensive amenities include two pools, a cinema, a music studio, ample event space and an Asaya, Rosewood’s integrative wellbeing concept. Slated to open in 2022, Asaya at Rosewood São Paulo will bring the destination a unique wellness concept that delivers innovative and integrative solutions for personal transformation while encouraging positive growth and self-discovery for a fulfilling life. The opening of Asaya at Rosewood São Paulo will mark the first outpost of Rosewood’s forward-thinking wellbeing concept in the western hemisphere. The hotel will roll out further facilities and amenities over the course of its first year, complemented by a robust schedule of ever-changing programming.