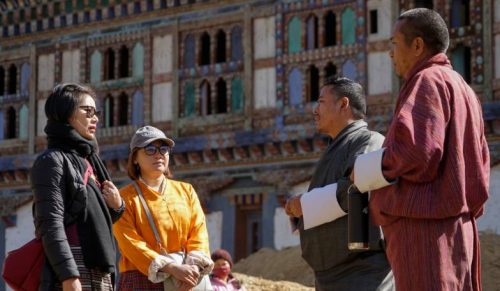 Hon. Curtis S. Chin is a Milken Institute Asia fellow and has served as a trustee of World Education Services of New York and is a former U.S. ambassador to the Asian Development Bank. As a member of the ADB board, he pushed for strengthened governance, risk management and development efforts focused on people, planet, and partnership, particularly on infrastructure projects in Asia’s least-developed nations. Through his advisory firm RiverPeak Group LLC, Chin now advises a range of startup firms and impact investors in Asia, including Equator Pure Nature, a leading ASEAN-based, natural consumer products company and cleantech pioneer, and the Dolma Impact Fund, the first international equity fund focused on Nepal. Chin previously was a senior executive with Burson-Marsteller in the US, Switzerland, and Asia, where he oversaw Beijing and Hong Kong operations.

Mr. Dechen Dorji is the Senior Director for Asia at WWF-US. Dechen oversees WWF-US’s wildlife efforts in Asia, working closely with their goal teams and leadership, WWF’s country offices, and the Wildlife Practice and other WWF initiatives to help develop, implement and mobilize resources for our wildlife conservation priorities in Asia. Dechen isn’t new to the WWF organization, previously serving for seven years as WWF’s Country Representative in Bhutan, where he led a number of successful conservation efforts, notably the ‘Bhutan for Life’ initiative, through which he worked closely with our leadership and the former Bhutanese Prime Minister to raise $43 million, and launched some of Bhutan’s first nationwide conservation efforts for threatened species such as tigers, Snow leopards and Golden Mahseer. Dechen also received the National Order of Merit, Gold, from His Majesty the King for the Bhutan for Life initiative and his services to the Bhutanese environmental sector.

Dr. Lisa Danzig is Chief Medical Officer at Excision BioTherapeutics and prior to that she was Chief Medical Officer at PaxVax, a specialty vaccine company in Redwood City, California. She also serves as an advisory to Pandefense Advisory and is the co-founder and managing partner of Amicitiam Partners. Dr. Danzig is an expert in vaccines. She has contributed to the development of meningococcal vaccines (Menjugate®, Menveo® and Bexsero®) and has worked in Siena, Italy, Cambridge, MA, and Hangzhou, China. During her two years as an EIS officer with the U.S. CDC, she investigated outbreaks of healthcare associated infections and taught epidemiology in Côte d’Ivoire to district health officers in West Africa. Dr. Danzig has been involved with Bhutan for many years through the Karuna Foundation and also serves as an advisor to the pandemic response in Bhutan.

Dr. Steve Harris worked as a telecommunications/internet lawyer and executive for over 30 years. He then returned to his love of history and received a Ph.D. in Modern European History at UC Davis in 2015. He now teaches history of democracy, historiography, modern European, and world history at San Francisco State University, where he is also co-director of the History for the 21st Century Project.

Hon. Kenneth I. Juster has over forty years of experience as a senior government official, senior business executive, and senior law partner. He recently completed service as the twenty-fifth U.S. Ambassador to the Republic of India (2017–2021). He previously served in the U.S. government as Deputy Assistant to the President for International Economic Affairs, on both the National Security Council and the National Economic Council (2017), Under Secretary of commerce (2001–2005), Counselor (acting) of the State Department (1992–1993), and Deputy and Senior Advisor to Deputy Secretary of State Lawrence Eagleburger (1989–1992). In the private sector, Juster has been a Partner at the global investment firm Warburg Pincus (2010–2017), Executive Vice President at Salesforce.com (2005–2010), and a Senior Partner at the law firm Arnold & Porter. He is currently Senior Counselor at the global law firm Freshfields, Senior Adviser at the institutional investor CDPQ, Strategic Adviser at the software company Salesforce, and Distinguished Fellow at the Council on Foreign Relations. Ambassador Juster developed a long-term friendship with Bhutan when he was Ambassador to India. He supported the funding of many new U.S. government initiatives in Bhutan, such as enhancing STEM Education and the restoration of the Wangduechhoeling Palace through the U.S. Ambassadors Fund for Cultural Preservation.